Varanasi (Hindustani pronunciation: [ʋaːˈraːɳəsi] ( listen)), also known as Kashi or Benares,[11] or Banaras (IAST: Banāras [bəˈnaːrəs] ( listen)), is a city on the banks of the river Ganges in Uttar Pradesh, India, 320 kilometres (200 mi) south-east of the state capital, Lucknow, and 121 kilometres (75 mi) east of Allahabad. A major religious hub in India, it is the holiest of the seven sacred cities in Hinduism and Jainism, and played an important role in the development of Buddhism and Ravidassia. Varanasi lies along National Highway 2, and is served by Varanasi Junction railway station and Lal Bahadur Shastri International Airport.

Varanasi grew as an important industrial centre famous for its muslin and silk fabrics, perfumes, ivory works, and sculpture. Buddha is believed to have founded Buddhism here around 528 BCE when he gave his first sermon, “The Setting in Motion of the Wheel of Dharma”, at nearby Sarnath. The city’s religious importance continued to grow in the 8th century, when Adi Shankara established the worship of Shiva as an official sect of Varanasi. During the Muslim rule through the Middle Ages, the city continued as an important centre of Hindu devotion, pilgrimage, mysticism and poetry which further contributed to its reputation as a centre of cultural importance and religious education. Tulsidas wrote his epic poem on Rama’s life called Ram Charit Manas in Varanasi. Several other major figures of the Bhakti movement were born in Varanasi, including Kabir and Ravidas.[12] Guru Nanak visited Varanasi for Maha Shivaratri in 1507, a trip that played a large role in the founding of Sikhism. 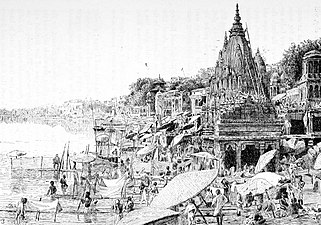 An illustration (1890) of Bathing Ghat in Varanasi.

According to Hindu mythology, Varanasi was founded by Shiva,[18] one of three principal deities along with Brahma and Vishnu. During a fight between Brahma and Shiva, one of Brahma’s five heads was torn off by Shiva. As was the custom, the victor carried the slain adversary’s head in his hand and let it hang down from his hand as an act of ignominy, and a sign of his own bravery. A bridle was also put into the mouth. Shiva thus dishonored Brahma’s head, and kept it with him at all times. When he came to the city of Varanasi in this state, the hanging head of Brahma dropped from Shiva’s hand and disappeared in the ground. Varanasi is therefore considered an extremely holy site.[19]

The Pandavas, the protagonists of the Hindu epic Mahabharata, are said to have visited the city in search of Shiva to atone for their sin of fratricide and Brāhmanahatya that they had committed during the climactic Kurukshetra War.[20] It is regarded as one of seven holy cities (Sapta Puri) which can provide Moksha; Ayodhya, Mathura, Haridwar, Kashi, Kanchi, Avanti, and Dvārakā are the seven cities known as the givers of liberation.[21] The princesses Ambika and Ambalika of Kashi were wed to the Hastinapur ruler Vichitravirya, and they later gave birth to Pandu and Dhritarashtra. Bhima, a son of Pandu, married a Kashi princess Valandhara and their union resulted in the birth of Sarvaga, who later ruled Kashi. Dhritarasthra’s eldest son Duryodhana also married a Kashi princess Bhanumati, who later bore him a son Lakshman Kumara and a daughter Lakshmanaa.

Located in the Indo-Gangetic Plains of North India, the land is very fertile because low-level floods in the Ganges continually replenish the soil.[54] Varanasi is situated between the Ganges confluences with two rivers: the Varuna and the Assi stream. The distance between the two confluences is around 2 miles (4 km), and serves as a sacred journeying route for Hindus, which culminates with a visit to a Sakshi Vinayak Temple. 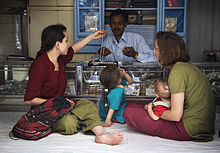 Tourists shopping for jewellery in Varanasi

According to the 2006 City Development Plan for Varanasi, approximately 29% of Varanasi’s population is employed.[106] Approximately 40% are employed in manufacturing, 26% work in trade and commerce, 19% work in other services, 8% work in transport and communication, 4% work in agriculture, 2% work in construction, and 2% are marginal workers (working for less than half of the year).[107]

Among manufacturing workers, 51% work in spinning and weaving, 15% work in metal, 6% work in printing and publishing, 5% work in electrical machinery, and the rest work in a wide variety of industry sectors.[108] Varanasi’s manufacturing industry is not well developed and is dominated by small-scale industries and household production.

Varanasi is a district in the north Indian state of Uttar Pradesh, with Varanasi city as the district headquarters. It is also called Kashi. According to Hindu and Buddhist mythologies, it is one of the sacred places of pilgrimage for Hindus and Buddhists. It is believed that Lord Shiva along with Parvathi as Vishwanatha and Vishalaakshi reside there to bless devotees. It is surrounded by Mirzapur district, Jaunpur district, Ghazipur district, Chandauli district, and Bhadohi district. The Ganga (Ganges) river flows through the district. It is considered by Hindus to be a sacred and pure river, having the ability to wash away sins when people take a dip in it. Part of the Varanasi division, the district occupies an area of 1,535 square kilometres (593 sq mi) and as of the 2011 Census of India, it had a population of 3,676,841.

Religion in Varanasi, according to the 2011 Census.

The Uttar Pradesh State Road Transport Corporation (UPSRTC) is a public sector passenger road transport corporation which services Uttar Pradesh, India, and adjoining states.[2] UPSRTC operates as a state and interstate bus service and has the largest fleet of buses in North India.[citation needed] The corporate office of the corporation are located in Lucknow.

Big Bazaar in Varanasi is one of the best supermarkets in the area. They also serve two other locations within Varanasi. Big Bazaar provides quality grocery and other household products with a friendly environment. It is a perfect place for shopping because it has everything possible from gaming, accessories to provisions and clothes need at the right price. All of their product is available at an affordable price and seasonal discounts. They afford a parking facility for two-wheelers as well as four-wheelers.

PDR Mall is one of the excellent shopping malls in Varanasi. It is a relaxation, enjoyable, and entertainment mall. The mall provides a wide selection of accessories and fashion apparel at a great value. The mall has an absolute culinary paradise with flavourings and cuisines to satisfy a wide variety of taste buds. PDR Mall provides a great shopping destination for its clients. It offers convenient parking areas to its clients.

JHV is one of the best and elegant cinema halls in Varanasi. It provides a premium quality picture, and crystal clear sound in high standards experience to its customers at affordable rates. JHV has different screens for 3D movies and also provide 3D glasses along. The team focused on quality, affordability and innovation and have challenged itself every day to ensure that they deliver an outstanding cinema experience to its customers. Online booking option is also available.

Nehru Park is a favourite place for walkers and joggers. It has a beautiful area for kids and a beautifully landscaped garden. The park has recreational activities and outdoor event conducting areas. Nehru Park has a children’s playground, picnic tables, barbecue area and covered picnic shelters. The park has a large region of open parkland are perfect for quiet contemplation. Ample parking area is available.

Santushti Hospital Pvt. Ltd. is one of the multispecialty hospitals in Varanasi. The hospital environment is clean, hygienic, and appropriately maintained. They have a well-dedicated team and nurses provide the best care with their friendly approach. Dr. Sanjay Kumar Garg is the chairman of this Santushti hospital. He is specialised in Uro surgeon. The hospital has all advanced technology and equipment. Their vision is to provide a better and healthy lifestyle to the patients. The hospital has 24 hours emergency service, ambulance service, diagnostic service, hemodialysis.