Surat is a city in the western Indian state of Gujarat. Located at the mouth of the Tapti River, it used to be a large seaport. It is now the commercial and economic center in South Gujarat, and one of the largest urban areas of western India. It has well-established diamond and textile industries, and is a shopping centre for apparels and accessories. It is the second largest city in Gujarat after Ahmedabad and the eighth largest city by population and ninth largest urban agglomeration in India. It is the administrative capital of the Surat district. The city is located 284 kilometres (176 mi) south of the state capital, Gandhinagar; 265 kilometres (165 mi) south of Ahmedabad; and 289 kilometres (180 mi) north of Mumbai. The city centre is located on the Tapti River, close to Arabian Sea.[11]

Surat will be the world’s fastest growing city from 2019 to 2035, according to a study conducted by Economic Times.[12] The city registered an annualised GDP growth rate of 11.5% over the seven fiscal years between 2001 and 2008.[13] Surat was awarded “best city” by the Annual Survey of India’s City-Systems (ASICS) in 2013.

From 1297, Gujarat was gradually conquered by Allauddin Khilji, the ruler of the principal state in north India at the time, the Delhi Sultanate. The Delhi Sultanate appointed Governors to control Gujarat, but this had to be forcefully imposed, notably in 1347, when Muhammad bin Tughluq sacked Surat, among other cities.[27]

As control from the Delhi Sultanate waned at the end of the 14th century, pressure grew for an independent Gujarat, culminating in the then Governor Zafar Khan declaring independence in 1407. Surat was controlled directly by the nobles of the Rajput kingdom of Baglana who fell either under the Gujarat Sultans or the Deccan sultanates. However, following the fall of the Gujarat Sultanate in 1538 it was controlled by more local nobles starting with Chengiz Khan who enjoyed absolute authority over Surat, Broach, Baroda and Champaner. [28] However, in 1637, Aurangzeb fully annexed Baglana into the Mughal Empire.

Surat is a port city situated on the banks of the Tapi river. Damming of the Tapi caused the original port facilities to close; the nearest port is now in the Magadalla and Hazira area of Surat Metropolitan Region. It has a famous beach called ‘Dumas Beach’ located in Hazira. The city is located at 21°10′N 72°50′E.[32] It has an average elevation of 13 metres. The Surat district is surrounded by the Bharuch, Narmada, Navsari, to the west is the Gulf of Cambay and the surrounding districts. The climate is tropical and monsoon rainfall is abundant (about 2,500 mm a year). According to the Bureau of Indian Standards, the town falls under seismic zone-III, in a scale of I to V (in order of increasing vulnerability to earthquakes).[33]

Climate
Surat has a tropical savanna climate (Köppen: Aw), moderated strongly by the Sea to the Gulf of Camboy. The summer begins in early March and lasts until June. April and May are the hottest months, the average maximum temperature being 37 °C (99 °F). Monsoon begins in late June and the city receives about 1,200 millimetres (47 in) of rain by the end of September, with the average maximum being 32 °C (90 °F) during those months. October and November see the retreat of the monsoon and a return of high temperatures until late November. Winter starts in December and ends in late February, with average mean temperatures of around 23 °C (73 °F), and negligible rain. 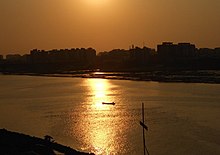 Surat ranked 9th in India with a GDP of 2.60 lakh crore in fiscal year 2016 ($40 billion in 2016). Surat GDP in 2020 will be around $57 billion estimated by The City Mayors Foundation, an international think tank on urban affairs. [3][39] Surat is a major hub of diamond cutting and polishing.[40] The first diamond workshops in Gujarat appeared in Surat and Navasari in the late 1950s. The major group working in this industry is people from the Saurashtra region of Gujarat. Because of demand in the American market from the early 1970s to the mid-1980s (with only a brief recession in 1979), Surat’s diamond industry grew tremendously. Currently, most of the diamond polishing workshops are running in the Varachha area of Surat, mostly by the people of the Patel community.[41] Around the world, 8 out of 10 diamonds on the market were cut and polished in Surat. This industry earns India about US$10 billion in annual exports.

Surat is a district in the state of Gujarat India with Surat city as the administrative headquarters of this district. It is surrounded by Bharuch, Narmada (North), Navsari (South) districts and east Tapi district To the west is the Gulf of Cambay. It is the second-most advanced district in Gujarat. It had a population of 6,081,322 of which 79.68% were urban as of 2011. On 2 October 2007 Surat district was split into two by the creation of a new Tapi district, under the Surat District Re-organisation Act 2007.

Surat, city, southeastern Gujarat state, west-central India. It lies near the mouth of the Tapti River at the Gulf of Khambhat (Cambay).

The city is believed to have been founded by a Brahman named Gopi, who built the Gopi Tank (water reservoir) in 1516 and named the area Surajpur or Suryapur. Surat became the name of the city in 1520. It was plundered by Muslims in the 12th and 15th centuries. In 1514 the Portuguese traveler Duarte Barbosa described Surat as a leading port.

The Sitilink or Surat BRTS is an integrated bus rapid transit and public bus transport system for Surat, Gujarat, India. It has been operational since 26 January, 2014 by Surat Municipal Corporation.

Surat Airport[4] (IATA: STV, ICAO: VASU) is a customs airport located in Magdalla, Surat in the Indian state of Gujarat with a total area of 770 acres (312 ha). It is the second busiest airport in Gujarat after Ahmedabad in terms of both aircraft movements and passenger traffic. It was awarded the custom notified status on 9 June 2018. It is also home to a flying training school.

The New Textile Market is one of India’s largest – a high-energy trading district with hundreds of shops crammed into multiple small malls. Vendors sell goods like silk and cotton fabric, saris with intricate zari embroidery, and suits to local buyers and visitors. Running through the market, the Ring Road is lined with simple restaurants serving dishes like curries and dahl

Astor Theatre is a heritage-listed cinema at 77 Burrowes Street, Surat, Maranoa Region, Queensland, Australia. It was built from 1925 to 1960s. It was added to the Queensland Heritage Register on 27 September 2002.

This is the largest zoological garden of the state and one of the oldest zoological parks of Gujarat, spread over the 81 acres with river Tapi on the north side and Surat Kamrej road is on its south side.

The zoo was established in 1984, the first zoo in South Gujarat region and Gujarat’s breeding center. The zoo has successfully bred lions, royal Bengal tigers, Himalayan bears and white peafowl.

Kiran Hospital is a hospital located in Katargam, Surat, India. The hospital was inaugurated by the Indian Prime Minister Narendra Modi on 17 April 2017