Ranchi is the capital of the Indian state of Jharkhand.[5] Ranchi was the centre of the Jharkhand movement,[6] which called for a separate state for the tribal regions of South Bihar, northern Orissa, western West Bengal and the eastern area of what is present-day Chhattisgarh. The Jharkhand state was formed on 15 November 2000 by carving out the Bihar divisions of Chota Nagpur and Santhal Parganas. Ranchi has been selected as one of the hundred Indian cities to be developed as a smart city under PM Narendra Modi’s flagship Smart Cities Mission.[7]

During the time of British, the city was used to be the summer capital of Bihar. This is because of its climate during winter season.[8] Ranchi is also one of the oldest cities in Jharkhand. Jagannath Temple and Ratu Palace are the sights which are also witness for the history of Ranchi.[9]

Now Ranchi is developing its economy. And for this its parks, special economic zones and industrial areas are being developed. Recently new sectors and modern areas are developed for the city’s development.[10] Ranchi is also called ‘City of Waterfalls’. 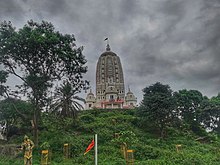 The early evidence of use of several iron slag, pot sheds, iron tools found in Chota Nagpur region around 1400 BCE.[18] Magadha Empire exercised indirect control over the territory, which lasted until the reign of the Ashoka. Armies of Samudra Gupta passed through the region on their expedition to the Deccan. In 4th century CE, Nagvanshi king Raja Pratap Rai chose Chutia as his capital which is now a place in Ranchi. Few ruins of Chutia trace back to 2nd Century CE.[12][19][20][21] With the expansion of the Mughal Empire, the sovereign status of the Nagvanshi dynasty was technically affected, but they continued to rule and administer independently. Thakur Ani Nath Shahdeo made Satrangi as capital of Barkagarh estate near Subarnarekha river. He built Jagannath Temple in 1691.

After Battle of Buxar, Nagvanshi became vassal of East India Company. British reduced Nagvanshi rulers to Jamindar in 1817.[24] In 1833, Captain Wilkinson established headquarter of the South-West Frontier agency in the village of Kishunpur, which he renamed into Ranchi after the hamlet located at the foot of the Hill.[25][26] Thakur Vishwanath Shahdeo, Pandey Ganpat Rai, Tikait Umrao Singh and Sheikh Bhikhari played a pivotal role in the Indian Rebellion of 1857.

Ranchi lies at 23°22′N 85°20′E near to the Tropic of Cancer. The city covers an area of 175 km2 (68 sq mi)[1] and its average elevation is 651 m above sea level. Ranchi is located in the southern part of the Chota Nagpur plateau, which is the eastern section of the Deccan plateau.

Ranchi has a hilly topography and its dense tropical forests a combination that produces a relatively moderate climate compared to the rest of the state. However, due to the uncontrolled deforestation and development of the city, the average temperature has increased.

As per a study done by ASSOCHAM in late 2010, Ranchi is the highest employment generating Tier-III cities in India followed by Mangalore and Mysore.[62] MECON Ltd Company has its headquarters in Ranchi at Ashok Nagar. Jharkhand Industrial Area Development Association has its office in Namkum. Central Coalfields also has its headquarters in Ranchi.

Ranchi houses a number of companies. Along with Jamshedpur, Dhanbad, Bokaro and Giridih it is one of the industrial hubs of the city. Here the following companies which are based in Ranchi and also headquartered in Ranchi itself only:Mecon limited, Central Coalfields, Heavy Engineering Corporation, Central Mine Planning and Design Institute, Jharkhand Rajya Gramin Bank and Dzinex Technology

Ranchi, Capital of Jharkhand is divided into Ranchi and Bundu subdivisions and each subdivision is further divided into blocks, panchayats and villages.It consists of 18 blocks and 305 panchayats.Under Ranchi SubDivision,there are 14 blocks and Bundu SubDivision consists of 4 blocks.
Ranchi, in its modern form, is the capital city of the Indian state of Jharkhand. The city has a moderate climate and was the summer capital of Bihar until Jharkhand was separated in the year 2000. It is popularly known as a “City of Water Falls”.

The city witnessed a sudden surge in population after the declaration of the new state of Jharkhand in 2000. Owing to the rising employment opportunities and opening of numerous regional and state level offices, banks and FMCG companies, the city witnessed a rapid influx of employment seeking migrants. As per a study done by ASSOCHAM in late 2010, Ranchi was one of the highest employment generating Tier-III cities in India with a share of 16.8%, followed by Mangalore and Mysore.

Ranchi has trains running frequently to Delhi, Kolkata and Patna. The city is a major railway hub and has four major stations: Ranchi Junction, Hatia, Tatisilwai and Namkon. It is one of the top hundred booking stations.

In India, an Inter State Bus Terminal or Inter-State Bus Terminus (ISBT) is a bus terminus that provides bus service to destinations located in other states. An ISBT may also provide bus services to destinations in the same state. Mostly ISBT Term is used in the Northern Part of India, In the western part of India, ST Stand or State Transport Term is used.

Birsa Munda Airport (IATA: IXR, ICAO: VERC),[4][5] also known as Ranchi Airport, is the primary airport serving the city of Ranchi, the capital city of the Indian state of Jharkhand. It is named after Indian tribal freedom fighter Birsa Munda and is currently managed by Airports Authority of India.[6] The airport is located in Hinoo, approximately 5 km (3.1 mi) from the city center. The airport sprawls over an area of 1568 acres.[7] The airport is used by more than 1.2 million passengers annually and is the 20th busiest airport in India.

Upper Bazaar in Ranchi is a popular place to do shopping for daily needs & other items. Shops like Anand Jewellers offers the best jewellery collection in Ranchi. One can purchase towels, bed sheets, textiles, cotton prints, etc. from shops like Kanodia Textile Co., Dhanuka, etc. Products of good quality at reasonable prices are available in this market. One can also shop from brands like Satya Paul Sarees and Gitanjali Lifestyle, now available in the city.

JD Hi Street Mall is the ﬁsrt mall of Ranchi and has brought the mall culture in Ranchi. The mall provides various options for shopping, food and entertainment for its customers. The mall consists of good brands for shopping, gaming zone, good outlets for food, movies and restaurants. The shopping area is spread through ground, first, second and third floor with brands like Reliance Trends, arrow, red tape, lee, wrangler, Pepe jeans and Fastrack. JD Hi Street Mall is a one-stop entertainment destination with multiple retail brands, eatery, world-class multiplex and gaming zone. The mall offers Multilevel parking that can accomodate upto 200 scooters and 100 cars at the same time.

S.R.S. Cinemas is an excellent movie theatre to watch both Bollywood and Hollywood movies, especially 3D movies. It has four auditoriums and a wide range of amenities that help you to enjoy the unforgettable movie experience. The cinema concessionaire has the best quality food items at very affordable prices. The largest is the most premium film and retail entertainment company in India. The online booking option is available. It convenient parking is also available.

Nakshatra Van is a lovely spot for people to get away from the city’s hustle and bustle. It comprises various Nakshatras surrounding a circle. This circle’s centre has a musical water fountain with a large pot collecting all its water. The park offers nature lovers the chance to see various natural habitats. Nakshatra Van is famous for informal leisure activities, such as walking, jogging and cycling.

Santevita Hospital an NABH accredited multispecialty hospital located at the heart of the city of Ranchi. It was commissioned in August 2012 and has since successfully treated thousands of patients. It is a centrally air conditioned hospital with modern clinical and surgical facilities comparable to the best, it has been designed and commissioned by Hosmac Consultants, Mumbai, one of the leading hospital consultants of India. With the state-of-the art building infrastructure and tastefully done interiors, Santevita has world class patient rooms fitted with equipments like the latest nurse call system and motorized beds.