Patna  historically known as Pataliputra and Azimabad (for a short period of time) is the capital and largest city of the state of Bihar in India.[1] According to the United Nations, as of 2018, Patna had a population of 2.35 million,[12] making it the 19th largest city in India.[1] Covering 250 square kilometres (97 sq mi) and over 2.5 million people, its urban agglomeration is the 18th largest in India. Patna serves as the seat of Patna High Court. The Buddhist, Hindu and Jain pilgrimage centres of Vaishali, Rajgir, Nalanda, Bodh Gaya and Pawapuri are nearby and Patna City is a sacred city for Sikhs as the tenth Sikh Guru, Guru Gobind Singh was born here.[13] The modern city of Patna is mainly on the southern bank of the river Ganges. The city also straddles the rivers Sone, Gandak and Punpun. The city is approximately 35 kilometres (22 mi) in length and 16 to 18 kilometres (9.9 to 11.2 mi) wide.

One of the oldest continuously inhabited places in the world,[14] Patna was founded in 490 BCE by the king of Magadha. Ancient Patna, known as Pataliputra, was the capital of the Magadh Empire through Haryanka, Nanda, Mauryan, Shunga, Gupta and Pala dynasties. Pataliputra was a seat of learning and fine arts. It was home to many astronomers and scholars including Aryabhata, Vātsyāyana and Chanakya. 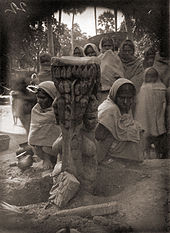 Statue of Matrikas found near Agam Kuan built by Ashoka

Traditional Buddhist literature attributes foundation of Patna 490 BCE[34][35] as Ajatashatru, the king of Magadha, wanted to shift his capital from the hilly Rajagrha (today Rajgir) to a strategically chosen place to better combat the Licchavis of Vaishali.[36] He chose the site on the bank of the Ganges and fortified the area. Gautama Buddha travelled through this place in the last year of his life. He prophesied a great future for this place even as he predicted its ruin due to flood, fire and feud.[37] According to Dieter Schlingloff, the Buddhist accounts may have presented the grandeur of Patna as a prophecy and that its wooden fortifications unlike other early historic Indian cities indicate that it might be much older than thought but only archaeological excavation and C14 dates of its wooden palisades which is presently lacking may establish this.

Megasthenes, the Indo-Greek historian and ambassador to the court of Chandragupta Maurya, gave one of the earliest accounts of the city. He wrote that the city was on the confluence of the rivers Ganga and Arennovoas (Sonabhadra – Hiranyawah) and was 14 kilometres (9 mi) long and 2.82 kilometres (1.75 mi) wide.[39][40] Megasthenes, the Greek ambassador to India, described the city as the greatest city on earth during its heyday.[41] The Shungas ultimately retained control of Pataliputra and ruled for almost 100 years. The Shungas were followed by the Kanvas and eventually by the Guptas.

During the British Raj, Patna was part of the Bengal Presidency. After Nalanda district was carved out of Patna district in 1976,[67] Patna was purged of all hilly regions. It is an alluvial, flat expanse of land. The land in the district is too fertile and is almost entirely cultivated with no forest cover. Alluvial soil found here is ideal for cultivation of rice, sugarcane and other foodgrains. The area under cultivation is studded with mango orchards and bamboo groves. 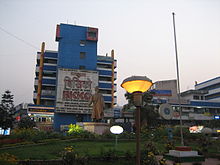 Patna has long been a major agricultural hub and centre of trade. Its most active exports are grain, sugarcane, sesame, and medium-grained Patna rice. There are several sugar mills in and around Patna.[91] It is an important business and luxury brand centre of eastern India.[92] The economy of Patna has seen sustained economic growth since 2005. The economy has been spurred by growth in the fast-moving consumer goods industry, the service sector, along with Green revolution businesses.[92] In 2009, the World Bank stated Patna as the second best city in India to start up a business.[93] As of 2015, GDP per capita of Patna is ₹1,06,000 ($1581) and its GDP growth rate is 7.29 per cent.[94] Patna is the 21st fastest growing city in the world and the fifth fastest-growing city in India, and is expected to grow at an average annual rate of 3.72%.[25] The major business districts of the city are Bander Bagicha, Exhibition Road, Gandhi Maidan Marg, Frazer Road, Indrapuri and Maurya Lok.

The revenue district of Patna comes under the jurisdiction of a District Collector (District Magistrate). The office of the Patna DM is in Patna Collectorate.

With an estimated population of 1.68 million in 2011, Patna is the 19th most populous city in India and with over 2 million people, its urban agglomeration is the 18th largest in India. Residents of Patna are referred to by the demonym Patnaite.[99][100]

Bihar State Road Transport Corporation or BSRTC is a state-owned road transportation company in Bihar with compared to other Indian states it is facing financial crisis in term of government funding, which degrade its process of expanding basic infrastructural assets both HR and number of buses in BSRTC, as par to 3 tier cities public transportation system.[4] BSRTC was set up in 1959 under the provisions of Road Transport Corporation Act, 1950. It is wholly owned by the Government of Bihar. In year 2020 Chief Minister of Bihar inaugurated Pataliputra Bus Terminal commonly known as ISBT, Patna. It is the first ISBT of Bihar.

Patna Airport known as Lok Nayak Jayaprakash Narayan International Airport is classified as a restricted international airport.[172] The arrival of several low-cost carriers and a number of new destinations have caused a growth in air traffic in recent years, as has an improvement in the situation with regard to law and order.[173] For the period April to December 2009 the airport ranked first in a survey of 46 airports in the country in terms of percentage growth of domestic passengers as well as domestic aircraft movement.[174] The Airport Authority of India (AAI) has proposed to develop a civil enclave at Bihta Air Force Station to serve as the new airport for Patna.

Khaitan Market, situated near Gandhi Maidan, is one of the best shopping complexes in the entire city with more than 500 shops that sell apparels, footwear, jewellery, household items, etc. in bulk at wholesale prices. It is unarguably the best place to shop for bridal trousseau in Patna as you will find the latest collection of lehengas, sarees, designer dress materials and jewellery here.

And when you get tired of all the shopping, replenish your energy levels with delicious food served at the numerous eateries here. You must try the famous Bihari-style litti chokha, chaat, kachauri sabji, samosa, etc.

Central Mall provides a seamless shopping experience offering over 300 brands across categories, such as apparel, footwear and accessories for women, men, children and infants.

Located on the Frazer Road near Patna Junction in Patna, Buddha Smriti Udyan is a large urban park which was constructed by the Patna Government to commemorate the 2554th anniversary of Lord Buddha. Inaugurated in 2010 by the 14th Dalai Lama himself, the highlight of the park is the magnanimous Patliputra Karuna Stupa situated in the centre of the park. Sprawling over 22 acres, there were two special saplings that were planted here at the time of its opening- one of it was brought from Bodh Gaya and the other from Anuradhapura in Sri Lanka.

All India Institute of Medical Sciences Patna (AIIMS Patna), previously Jaya Prakash Narayan All India Institute of Medical Sciences (JPNAIIMS),[2] is a medical college and medical research public institute located in Phulwari Sharif, Patna, Bihar, India. It is one of the Institutes of National Importance in India. It started operating on 25 September 2012 after a series of observations by Patna High Court.[3] The institute operates autonomously under the Ministry of Health and Family Welfare. Its foundation was laid by Bhairon Singh Shekhawat, on 3 January 2004, during his tenure as vice-president.[2] As of 2018, it became fully functional.