Nashik  also called as Nasik  is an ancient city and the largest city in the northern region of the Indian state of Maharashtra. Situated on the banks of river Godavari, Nashik is the fourth largest city in Maharashtra, after Mumbai, Pune and Nagpur. Nashik is well known for being one of the Hindu pilgrimage sites of the Kumbh Mela, which is held every 12 years.[6][7] Nashik is located about 190 km north of state capital Mumbai. The city is called the “Wine Capital of India” as more than half of India’s vineyards and wineries are located here. Around 90% of all wine produced in India comes from the Nashik Valley.[1][8]

Nashik was known by different names in different Yugas. According to Hindu legends, It was known as “Padmanagar” during Satya Yuga, “Trikantak” during Treta Yuga, “Janasthana” during Dvapara Yuga, and ultimately “Navashikh” or “Nashik” during Kali Yuga. During the Mughal period it was known as “Gulshanabad”, the city of roses. Nashik has mythological, historical, social and cultural importance. The city is situated on the banks of the Godavari River, making it one of the holiest places for Hindus all over the world. According to Hindu mythology, Lord Rama, the King of Ayodhya, made Nashik his abode during his 14 years in exile. At the same place Lord Laxman, by the wish of Lord Rama, cut the nose of “Shurpanakha” and thus this city was named as “Nasik” as the word Nasik means nose in Sanskrit.

After the fall of the Satavahana empire, the Abhiras or Ahirs ruled in the north east and the Chutus in Maharashtra and Kuntala. The Puranas state that ten Abhira tribes ruled for 67 years. The Nashik inscription speaks of king Madhuriputra Ishvarasena, the Abhir and a son of Shivadatla. This dynasty originated in 249–250 CE, an era called Kalachuri or Chedi in later times.[1]

Classical Sanskrit poets like Valmiki, Kālidāsa and Bhavabhuti have paid rich tributes here. In 150 BCE Nashik was the country’s largest market place. From 1487 CE, the province came under the rule of Mughals and its name was changed Gulshanabad (No such proofs for this name). It was also home of Emperor Akbar who wrote at length about Nashik in Ein-e-Akbari. It was also known as the ‘Land of the Brave’ during the regime of Maratha Emperor Shivaji.

The most important historical significance is that Kumbh Mela is conducted at Nashik once every twelve years, out of 4 places in India.

Nashik lies in the northern part of Maharashtra state at 584 m (1,916 ft)[9] from the mean sea level which gives it ideal temperature variation, particularly in winters.

The river Godavari originates from the Brahmagiri Mountain, Trimbakeshwar about 24 km (15 mi) from Nashik and flows through the old residential settlement, now in the central part of the city. Due to high pollution created by factories in proximity of the city the river was dying at an alarming rate. It has since been successfully cleaned.[10]

Nashik lies on the western edge of the Deccan Plateau which is an ancient volcanic formation.[11] 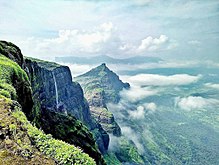 In early 1925, the table grape revolution was started in Ojhar, a small town near Nashik, by Raosaheb Jairam Krishna Gaikwad. Today, table grapes are exported to Europe, the Middle East, and Asia.

The Igatpuri-Nashik-Sinnar investment region is an important node in the US$90 billion Delhi Mumbai Industrial Corridor Project.

Nashik is a defense and aerospace manufacturing hub with Hindustan Aeronautics Limited aircraft manufacturing plant located at Ozar. The Currency Note Press and India Security Press are on Nashik Road, where Indian currency and government stamp papers are printed respectively.

Nashik district, also known as Nasik district, is a district in Maharashtra, India. The city of Nashik is the administrative headquarters of the district. Nashik is well known for the production of wine. Nashik is also known as Mini Maharashtra, because the climate and soil conditions of Surgana, Peth, Igatpuri resembles with Konkan. Niphad, Sinnar, Dindori, Baglan blocks are like Western Maharashtra and Yeola, Nandgaon, Chandwad blocks are like Vidarbha Region. Nashik is the biggest city in the district while malegaon is the second biggest city. Manmad, Igatpuri, sinnar are some of the big cities situated in the Nashik District. manmad is one of the biggest railway junction in india while the city of malegaon is famous for its powerlooms

The Western Ghats or Sahyadri range stretches from north to south across the western portion of the district. With the exception of the westernmost few villages, the western portion is hilly, and intersected by ravines, and only the simplest kind of cultivation is possible. The western slope of the Ghats is drained by several rivers, including the Daman Ganga River, which drains westwards to the Arabian Sea.

The Maharashtra State Road Transport Corporation abbreviated as (MSRTC, or simply ST), is the state run bus service of Maharashtra, India which serves routes to towns and cities within Maharashtra as well as to its adjoining states. It has a fleet strength of 18,449 buses. It also offers a facility for online booking of tickets for all buses. Recently From 21st May 2020, the Corporation Started Goods Transportation, Private Bus Body Building, Private Vehicle Tyre Remoulding In Future Corporation will start Petrol Pump for Private Vehicles all over the Maharashtra.

Nashik Airport (IATA: ISK, ICAO: VAOZ) is located at Ozar, 20 kilometres (12 mi) northeast of the city of Nashik, Maharashtra, India. It is owned by Hindustan Aeronautics Limited, which uses the airport primarily to develop, test and build aircraft for the Indian Armed Forces. It is home to a maintenance station of the Indian Air Force and also supports wide body commercial cargo services.[6] A new passenger terminal was inaugurated on 3 March 2014.[7] It serves Nashik Metropolitan Region as well as North Maharashtra Region.

If preparing for a cold winter, head to the Tibetan Bazaar in Nashik to buy all sorts of woollens from tiny stalls and shops. This list includes socks and gloves, scarves and mufflers, sweaters and jackets at reasonable prices. The bazaar is a perfect place to satiate hunger, with Maharashtrian delicacies lined up in rows at the food stalls. The marketplace offers chaat, vegetarian and non-vegetarian cuisine. Everything is economical, too.

Nashik City Centre Mall is a place where so many vendors doing business Shopping Mall complex in Nashik, Maharashtra, India. It was developed by the Sarda group in partnership with Erdeen Fund Management, a PE firm from London. The Mall has opened in parts in April 2009 and will fully commence operations by September 2010. Its mix has leading Indian and International brands.

Shubham Water World is situated in Anjeneri Hills and the park is dotted with swings and slides and roller coasters and is popular among both the kids and adults. This water park in Nashik also has an amusement park, play area and food options.

Apollo Hospitals, Nashik is located near Panchavati, a holy place near Nashik. Apollo’s mission of bringing healthcare of international standards within the reach of every individual has inspired the group to start this facility at Nashik. Nashik, today is one of the fastest growing economic cities of India with a growing demand for quality health care. This project is based on Apollo’s vision for the next phase of development that is to Touch a Billion Lives and to reach as many districts as possible spreading quality health care to billions.