Kanpur  also known as Cawnpore, is a metropolitan city in the state of Uttar Pradesh in India. Founded in 1803, Kanpur became one of the most important commercial and military stations of British India. Nestled on the banks of Ganges River, Kanpur stands as the major financial and industrial centre of North India and also the ninth-largest urban economy in India.[9][10] Today it is famous for its colonial architecture, gardens, parks and fine quality leather products which are exported mainly to the West.

The city is famous for its leather and textile industries. It is the 12th most populous city and the 11th most populous urban agglomeration in India. Kanpur was an important British garrison town until 1947, when India gained independence. The urban district of Kanpur Nagar serves as the headquarters of the Kanpur Division, Kanpur Range and Kanpur Zone. 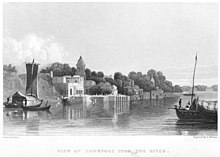 In the 19th century, Cawnpore was an important British garrison with barracks for 7,000 soldiers. During the Indian Rebellion of 1857, 900 British men, women and children were besieged in the fortifications for 22 days by rebels under Nana Sahib Peshwa. They surrendered on the agreement that they would get safe passage to the nearby Satti Chaura Ghat whereupon they would board barges and be allowed to go by river to Allahabad.[16]

Though controversy surrounds what exactly happened at the Satti Chaura Ghat, and who fired the first shot, it is known that, soon afterwards, the departing British were shot at by the rebel sepoys and were either killed or captured. Some of the British officers later claimed that the rebels had, on purpose, placed the boats as high in the mud as possible, to cause delay. They also claimed that Nana Sahib’s camp had previously arranged for the rebels to fire upon and kill all the English. Although the East India Company later accused Nana Sahib of betrayal and murder of innocent people, no evidence has ever been found to prove that Nana Sahib had pre-planned or ordered the massacre. Some historians believe that the Satti Chaura Ghat massacre was the result of confusion, and not of any plan implemented by Nana Sahib and his associates.

Kanpur is a major industrial centre of Uttar Pradesh. The city is popularly known as Leather City of India as it is home to numerous tanneries which produce quality leather products. The city is located on the banks of River Ganges and has an approximate area of 605 square km.

The city is located 126 meters above mean sea level. Kanpur lies in close vicinity of Lucknow, the capital of Uttar Pradesh and is 74 km from Lucknow. Another important city of Uttar Pradesh, Allahabad is situated at a distance of 254 km from Kanpur.

Majority of the population in Kanpur comprises of people who have come over from western and central parts of Uttar Pradesh. This has led to creation of an ambient atmosphere in the city and one can get a glimpse of cultural richness of the state in Kanpur. Kanpur has traditionally been an industrial city and on economic center. At one point in time it was the second most industrialized city in India being second only to Calcutta. Due to large number of cotton textile units and a vibrant trade center for cotton it was also called he ‘Manchester of India’.

There are many heavy and medium scale industries which are engaged in the
production of defence items, industrial machines, LMS (Two Wheelers),
leather, cloth industries. It has been observed that out of total 83
heavy/medium industries, 38 are currently working whereas 45 industries have
been closed. As far as their ownership is concerned, 3 are of central
government, 6 are of defence, one is of state government and twenty eight are
private industries. Up to March 2005, total heavy scale industrial units are 83
and investment made is 873.88 crores. These industries provide the
employment to total 65563 people. Table No. 3.2 presents the number of heavy
and small scale registered units, its investment and people employed.

Kanpur Nagar district, meaning Urban Kanpur District is one of the districts of the Uttar Pradesh state of India. It is a part of Kanpur division and its district headquarters is Kanpur. Kanpur was formerly spelled Cawnpore.

Kanpur division is an administrative geographical unit of Uttar Pradesh state of India. Kanpur is the administrative headquarters of the division. Kanpur was formerly spelled Cawnpore. The division consists of six districts:

There are 35 Parsis in Kanpur with their Fire Temple at The Mall.[25]

Hinduism is a majority in Kanpur with sizeable minority of Muslims. Sikhs, Christians and Buddhists are below 2 percent.

The Mumbai Suburban Railway, popularly referred to as Locals forms the backbone of the city’s transport system. It is operated by the Central Railway and Western Railway zones of the Indian Railways. Mumbai’s suburban rail systems carried a total of 6.3 million passengers every day in 2007.

Navin Market is located in Colonel Ganj and is located close to a number of shopping malls the Z Square Malls and Rave3 as well as eateries like Palate which is a multi-cuisine restaurant and Annapurna Restaurant that offers vegetarian fare. This market can be accessed by public transport as well as private vehicles fairly easily. It is located about 2 km away from Kanpur Terminus. Recently, the crowded streets of Naveen Market are set to get a facelift which is all thanks to the most recent proposal put forth by the government. This plan has been put into motion following the successful redevelopment of markets in Lucknow to make it more appealing and attractive to shoppers. This will be achieved by painting the entire market by keeping to a theme and have standard sign – boards for every shop present in the market.

Z Square Mall is a one-stop destination for all your needs. It spread on an area of five acres in the heart of the Kanpur city with 900,000 square feet of built-up space. The mall has over 150 international and national brands under one roof. They ready to explore and discover new ways to meet their customer’s needs and help them achieve their goals. You can enjoy the unique shopping experience in the Z Square Mall. Z Square Mall has all type of shops to satisfy your expectations and needs. The mall offers free wi-fi service to all registered wallet members.

Sanjay Van Chetana Kendra is a lush green park as well as a hub for preservation. It covers an area enclosed by the trees and also has a playground. It is a cheerful, fresh and peaceful environment here in the morning and evening hours. Most people come here for exercise in the morning, along with some other activities which happen every day here. Some curricular activities include Yoga, Classical music, etc. Locals spend most of their time here for fresh air and to be around nature. In the rainy season, this park in Kanpur is the place to visit for the greenery. Timings are from 5:00 AM – 8:00 PM on all days of the week.

Sanjay Van Chetana Kendra is a lush green park as well as a hub for preservation. It covers an area enclosed by the trees and also has a playground. It is a cheerful, fresh and peaceful environment here in the morning and evening hours. Most people come here for exercise in the morning, along with some other activities which happen every day here. Some curricular activities include Yoga, Classical music, etc. Locals spend most of their time here for fresh air and to be around nature. In the rainy season, this park in Kanpur is the place to visit for the greenery. Timings are from 5:00 AM – 8:00 PM on all days of the week.