Aurangabad  is a city in the Indian state of Maharashtra. It is the administrative headquarters of Aurangabad district and is the largest city in the Marathwada region.[4] Located on a hilly upland terrain in the Deccan Traps, Aurangabad is the fifth-most populous urban area in Maharashtra with a population of 1,175,116. The city is known as a major production center of cotton textile and artistic silk fabrics. Several prominent educational institutions, including Dr. Babasaheb Ambedkar Marathwada University, are located in the city. The city is also a popular tourism hub, with tourist destinations like the Ajanta and Ellora caves lying on its outskirts, both of which have been designated as UNESCO World Heritage Sites since 1983.[5] Other tourist attractions include the Aurangabad Caves, Daulatabad Fort, Grishneshwar Temple, Jama Mosque, Bibi Ka Maqbara, Himayat Bagh, Panchakki and Salim Ali Lake. Historically, there were 52 Gates in Aurangabad, some of them extant, because of which Aurangabad is nicknamed as the “City of Gates”. In 2019, the Aurangabad Industrial City (AURIC) became the first greenfield industrial smart city of India under the country’s flagship Smart Cities Mission. 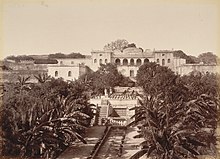 Khaḍkī was the original name of the village which was made a capital city by Malik Ambar, the Prime Minister of Murtaza Nizam Shah II, Sultan of Ahmednagar. Within a decade, Khaḍkī grew into a populous and imposing city. Malik Ambar died in 1626.[8] He was succeeded by his son Fateh Khan, who changed the name of Khaḍkī to Fatehnagar. With the capture of Daulatabad Fort by the imperial troops in 1633, the Nizam Shahi dominions, including Fatehnagar, came under the possession of the Mughals.[9]

In 1653 when Mughal prince Aurangzeb was appointed the Viceroy of the Deccan for the second time, he made Fatehnagar his capital and renamed it Aurangabad. Aurangabad is sometimes referred to as Khujista Bunyad by the Chroniclers of Aurangzeb’s reign.

In 1724, Asaf Jah, a Turkic general and Nizam al-Mulk of the Mughals in the Deccan region, decided to secede from the crumbling Mughal Empire, with the intention of founding his own dynasty in the Deccan and decided to make Aurangabad his capital. His son and successor, Nizam Ali Khan Asaf Jah II transferred his capital from Aurangabad to Hyderabad in 1763.

The entire area is covered by the Deccan Traps lava flows of Upper Cretaceous to Lower Eocene age. The lava flows are overlain by thin alluvial deposits along the Kham and Sukhana river. The basaltic lava flows belonging to the Deccan Trap is the only major geological formation occurring in Aurangabad. The lava flows are horizontal and each flow has two distinct units. The upper layers consist of vesiculara and amygdaloidal zeolitic basalt while the bottom layer consists of massive basalt. The lava flows are individually different in their ability to receive as well as hold water in storage and to transmit it. The difference in the productivity of groundwater in various flows arises as a result of their inherent physical properties such as porosity and permeability. The groundwater occurs under water table conditions and is mainly controlled by the extent of its secondary porosity i.e. thickness of weathered rocks and spacing of joints and fractures. The highly weathered vesicular trap and underlying weathered jointed and fractured massive trap constitutes the main water-yielding zones. The soil is mostly formed from igneous rocks and is black, medium black, shallow and calcareous types having different depths and profiles. 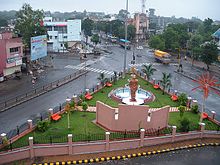 Aurangabad is considered to be a classic example of efforts of state government towards balanced industrialisation of state.[21] The city was a major silk and cotton textile production center. A fine blend of silk with locally grown cotton was developed as Himroo textile. Paithani silk saris are also made in Aurangabad. With the opening of the Hyderabad-Godavari Valley Railways in the year 1900 several ginning factories were started.[22] After 1960, Maharashtra Industrial Development Corporation (MIDC) began acquiring land and setting up industrial estates. The Maharashtra Center For Entrepreneurship Development’s main office is in Aurangabad.[23] Major industries in Auragabad are manufacturing, biotechnology, pharmaceuticals and automobiles etc.[24]

Aurangabad is surrounded by the industrial areas (MIDCs) of Chikhalthana, Shendra and Waluj MIDC. A new industrial belt namely Shendra – Bidkin Industrial Park is being developed under DMIC.[25] Major Siemens and automotive companies such as BMW, Audi India, Skoda Auto, Bajaj Auto and Goodyear Tire and Rubber Company have there units in the city.

In Aurangbad district, total Forest Area is 135.75 Sq.Km. as compare to Maharashtra the forest area of Aurangabad is 9.03%.

The main rivers in Aurangabad district are Godavari and Tapi and also Purna, Shivna, Kham . Dudhna, Galhati and Girja rivers are the sub rivers of Godavari.

In Aurangabad district as per the Census 2011 total population is 3,701,282 and peoples mainly speaks Marathi, Hindi, English and Urdu language.

Aurangabad railway station is the major railway station under Nanded railway division of the South Central Railway zone. It is located on the Secunderabad-Manmad section and has rail connectivity with major cities such as Hyderabad, Delhi, Nizamabad, Nagpur, Nashik, Pune, Nanded and Latur Road.

Aurangabad Airport is an airport serving the city and has connecting flights to Hyderabad, Delhi, Mumbai, Bangalore, Ahmedabad, Udaipur, Tirupati, Visakhapatnam and Thiruvananthapuram. In 2008, flights were made available to the people travelling to the Hajj pilgrimage.

Reliance Mall has over many years of vast experience in the industry. Their nationwide network of retail outlets delivers a world-class shopping environment. They offer unmatched customer experience by their state-of-the-art technology and seamless supply-chain infrastructure. The Reliance mall always provides the best services and products with attractive deals for customers. The mall offers an enthralling lifestyle shopping experience.

PVR Cinemas is one of the famous movie theatres in the heart of Aurangabad. It is a large and spacious theatre with three humongous screens showing all the latest movies. The comfortable seats and quick service are some notable features of PVR talkies. You can choose from an array of show timings and book tickets. Gift cards, bulk booking & online booking facilities are available. It operates 845 screens in 176 cinemas in 71 cities in India.

N3 Ketley Garden is the best relaxing and beautiful picnic spot in Aurangabad. It has a lovely nature play area, enjoys outdoor activities, and gathers sites for picnic visitors. The park is a lovely place for the family and children to have fun and enjoy a fun day. N3 Ketley Garden has kids playing equipment, outdoor fitness station, indoor event conducting areas and multi-purpose areas. The park has lots of ample parking areas.

United CIIGMA Hospital is one of the best multispecialty hospitals in Aurangabad. The hospital has three hundred bedded facilities with a Modular OT complex, Endoscopy suites all under one roof. They were giving outstanding patient care in a wide range of medical departments. Their hospital is a world-class facility equipped with the latest technology and operated by trained medical experts. They have a dedicated team, nurse, and staff in a warm and friendly environment. They help society to the best possible extent, facing the challenges of changing trends in medical technology worldwide. United CIIGMA has consultations not only from India but across the globe. They have well-equipped laboratory facilities and modern operation theatre. They have 24 hours emergency service, pharmacy, and ambulance services.