Ahmedabad  is the most populous city in the Indian state of Gujarat. It is the administrative headquarters of the Ahmedabad district and the seat of the Gujarat High Court. Ahmedabad’s population of 5,633,927 (as per 2011 population-census) makes it the fifth-most populous city in India, and the encompassing urban agglomeration population estimated at 6,357,693 is the seventh-most populous in India. Ahmedabad is located near the banks of the Sabarmati River, 25 km (16 mi) from the capital of Gujarat, Gandhinagar, also known as its twin city.

Ahmedabad has emerged as an important economic and industrial hub in India. It is the second-largest producer of cotton in India, due to which it was known as the ‘Manchester of India’ along with Kanpur. Ahmedabad’s stock exchange (before it was shut down in 2018) was the country’s second oldest. Cricket is a popular sport in Ahmedabad. A newly built Narendra Modi Stadium at Motera can accommodate 132,000 spectators, being the largest stadium in the world. And upcoming World Class Sports Enclave (SVP Sports Enclave Ahmedabad) It will be one of the Biggest Sports Center (Sports City) in India. The effects of liberalisation of the Indian economy have energised the city’s economy towards tertiary sector activities such as commerce, communication and construction. Ahmedabad’s increasing population has resulted in an increase in the construction and housing industries resulting in development of skyscrapers.

The area around Ahmedabad has been inhabited since the 11th century, when it was known as Ashaval. At that time, Karna, the Chaulukya (Solanki) ruler of Anhilwara (modern Patan), waged a successful war against the Bhil king of Ashaval, and established a city called Karnavati on the banks of the Sabarmati. Solanki rule lasted until the 13th century, when Gujarat came under the control of the Vaghela dynasty of Dholka. Gujarat subsequently came under the control of the Delhi Sultanate in the 14th century. However, by the earlier 15th century, the local Khatri Muslim governor Zafar Khan Muzaffar established his independence from the Delhi Sultanate and crowned himself Sultan of Gujarat as Muzaffar Shah I, thereby founding the Muzaffarid dynasty. This area finally came under the control of his grandson Sultan Ahmed Shah in 1411 A.D. who while at the banks of Sabarmati liked the forested area for a new capital city and laid the foundation of a new walled city near Karnavati and named it Ahmedabad after the four saints in the area by the name Ahmed.According to other sources, he named it after himself.

Ahmedabad lies at 23.03°N 72.58°E in western India at 53 metres (174 ft) above sea level on the banks of the Sabarmati river, in north-central Gujarat. It covers an area of 505 km2 (195 sq mi).[4][5][6][7] The Sabarmati frequently dried up in the summer, leaving only a small stream of water, and the city is in a sandy and dry area. However, with the execution of the Sabarmati River Front Project and Embankment, the waters from the Narmada river have been diverted to the Sabarmati to keep the river flowing throughout the year, thereby eliminating Ahmedabad’s water problems. The steady expansion of the Rann of Kutch threatened to increase desertification around the city area and much of the state; however, the Narmada Canal network is expected to alleviate this problem. Except for the small hills of Thaltej-Jodhpur Tekra, the city is almost flat. Three lakes lie within the city’s limits—Kankaria, Vastrapur and Chandola. Kankaria, in the neighbourhood of Maninagar, is an artificial lake developed by the Sultan of Gujarat, Qutb-ud-din, in 1451. 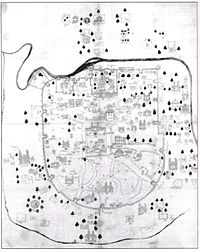 The gross domestic product of Ahmedabad was estimated at US$80 billion in 2014.[176][177] The RBI ranked Ahmedabad as the seventh largest deposit centre and seventh largest credit centre nationwide as of June 2012.[178] In the 19th century, the textile and garments industry received strong capital investment. On 30 May 1861 Ranchhodlal Chhotalal founded the first Indian textile mill, the Ahmedabad Spinning and Weaving Company Limited,[179] followed by the establishment of a series of textile mills such as Calico Mills, Bagicha Mills and Arvind Mills. By 1905 there were about 33 textile mills in the city.[180] The textile industry further expanded rapidly during the First World War, and benefited from the influence of Mahatma Gandhi’s Swadeshi movement, which promoted the purchase of Indian-made goods.[181] Ahmedabad was known as the “Manchester of the East” for its textile industry.[51] The city is the largest supplier of denim and one of the largest exporters of gemstones and jewellery in India.[19] The automobile industry is also important to the city; after Tata’s Nano project, Ford and Suzuki are planning to establish plants near Ahmedabad while the Groundbreaking ceremony for Peugeot has already been performed.

Ahmedabad District comprises the city of Ahmedabad, in the central part of the state of Gujarat in western India. It is the seventh most populous district in India (out of 739).

Ahmadabad, also spelled Ahmedabad, city, eastern Gujarat state, west-central India. It lies along the Sabarmati River about 275 miles (440 km) north of Mumbai (Bombay). Ahmadabad is at the junction of the main roads leading to Mumbai and central India, the Kathiawar Peninsula, and the Rajasthan border. The city is also a major junction on the Western Railway, with lines running to Mumbai, Delhi, and the Kathiawar Peninsula. Pop. (2001) city, 3,520,085; urban agglom., 4,518,240; (2011) city, 5,577,940; urban agglom., 6,357,693.The city was founded in 1411 by the Muslim ruler of Gujarat, Sultan Aḥmad Shah, next to the older Hindu town of Asawal. Ahmadabad grew larger and wealthier for a century, but dynastic decay and anarchy eventually brought about a decline, and the city was captured in 1572 by the Mughal emperor Akbar. Its renewed eminence under the Mughals ceased with the death of Aurangzeb in 1707. Ahmadabad’s further decline was arrested by the British annexation of Gujarat in 1818. The city’s first cotton mills were opened in 1859–61, and Ahmadabad grew to become one of the most populous cities and largest inland industrial centres in India.

At the 2011 Census of India Ahmedabad had a population of 5,633,927, making it the fifth most populous city in India. The urban agglomeration centred upon Ahmedabad, then having a population of 6,357,693, now estimated at 7,650,000, is the seventh most populous urban agglomeration in India.[16][17] The city had a literacy rate of 89.62%; 93.96% of the men and 84.81% of the women were literate. Ahmedabad’s sex ratio in 2011 was 897 women per 1000 men. According to the census for the Ninth Plan, there are 30,737 rural families living in Ahmedabad. Of those, 5.41% (1663 families) live below the poverty line. Approximately 440,000 people live in slums within the city. In 2008, there were 2273 registered non-resident Indians living in Ahmedabad. In 2010, Forbes magazine rated Ahmedabad as the fastest-growing city in India, and listed it as third fastest-growing in the world after the Chinese cities of Chengdu and Chongqing. In 2011, it was rated India’s best megacity to live in by leading market research firm IMRB. According to the National Crime Records Bureau (NCRB) report of 2003, Ahmedabad has the lowest crime rate of the 35 Indian cities with a population of more than one million.In December 2011 market research firm IMRB declared Ahmedabad the best megacity to live in, when compared to India’s other megacities.[73] Slightly less than half of all real estate in Ahmedabad is owned by “community organisations” (i.e. cooperatives), and according to Vrajlal Sapovadia, professor of the B.K. School of Business Management, “the spatial growth of the city is to [an] extent [a] contribution of these organisations”.[74] Ahmedabad Cantonment provides residential zones for Indian Army officials.

Ahmedabad is one of six operating divisions in the Western Railway zone. Ahmedabad railway station, locally known as Kalupur station, is the main terminus to differentiate it from other suburban railway stations. It is the center point of railway station of Gujarat and Western railway so many lines begin from here connecting the city to elsewhere in Gujarat and India.

Sardar Vallabhbhai Patel International Airport, 15 km (9.3 mi) from the city centre, provides domestic and international flights for Ahmedabad and the capital Gandhinagar .It is the busiest airport in Gujarat and the seventh-busiest in India in terms of passenger traffic. The Ahmedabad airport was earlier managed by Airports Authority of India and was leased to the city based Adani Group in November 2020 for operations and maintenance

Lal Darwaja in Ahmedabad is the most famous and busiest shopping arena. Make sure you pay a visit to this amazing place and fill your bags with stuff for everyone at cheap and economical prices. Be it sarees, garments for men, clothes for children or stylish dresses, you can buy everything at one stop. During your shopping spree, this place will become your best friend and it will entice you as you wind your wany further up its route. All the products available here are very good in quality and the for the price you get them, you will be beckoned to come again and again. Chaniya cholis, colorful dupattas, wallets, old books and many other things are also available in this street side shopping complex.

The mall has three anchor stores.[9] The biggest anchor store HyperCity occupies 80,000 square feet is located at the basement of the mall.[10][11] The other two anchors Lifestyle Stores, Shoppers Stop located at the two ends of the mall spans vertically for 3 floors.[11] The mall is claimed to have 210 stores under its roof.[9] Other major brands present in the mall are Madura, Lolipop, Estelle, Chavda, Color Fab, Gini and Jony and Anshu’s Designer Studio.[12][13] The food court and the multiplex are located on the third floor.[11] The 6-screen multiplex is spread across 40,000 sq.ft and is operated by Cinepolis.

Drive-In-Cinema is more than just a theatre, it gives you a superior cinema experience along with high-quality sound with superb settings under the stars. It is one of the favourite summer pastimes. Drive-In-Cinema for an amazing experience and get your hands on delicious food form their food court.

Kankaria Lake is the second largest lake in Ahmedabad, Gujarat, India. It is located in the south-eastern part of the city, in the Maninagar area. It was completed in 1451 during the reign of Sultan Qutb-ud-Din Ahmad Shah II though its origin is placed in the Chaulukya period sometimes. A lakefront is developed around it, which has many public attractions such as a zoo, toy train, kids city, tethered balloon ride, water rides, water park, food stalls, and entertainment facilities. The lakefront was revamped in 2007–2008. Kankaria Carnival is a week-long festival held here in the last week of December. Many cultural, art, and social activities are organised during the carnival.

SVP Hospital or Sardar Vallabhbhai Patel Institute of Medical Sciences and Research is a public hospital and medical college in Ahmedabad, India. It was inaugurated by the Prime Minister of India, Narendra Modi, on January 17, 2019. The building, consisting of 17 floors, a ground floor, and two basements, was built at a cost of 750 crores by Amdavad Municipal Corporation.

WE HELP YOU TO SELL