Agra’s notable historical period began during Sikandar Lodi’s reign, but the golden age of the city began with the Mughals. Agra was the foremost city of the Indian subcontinent and the capital of the Mughal Empire under Mughal emperors Babur, Humayun, Akbar, Jahangir and Shah Jahan. Under Mughal rule, Agra became a centre for learning, arts, commerce, and religion, and saw the construction of the Agra Fort, Sikandra and Agra’s most prized monument, the Taj Mahal, built by Shah Jahan as a mausoleum for his favourite empress. With the decline of the Mughal empire in the late 18th century, the city fell successively first to Marathas and later to the East India Company. After Independence, Agra has developed into an industrial town, with a booming tourism industry, along with footwear, leather and other manufacturing. The Taj Mahal and the Agra Fort are UNESCO World Heritage Sites. The city features mild winters, hot and dry summers and a monsoon season, and is famous for its Mughlai cuisine. Agra is included on the Golden Triangle tourist circuit, along with Delhi and Jaipur; and the Uttar Pradesh Heritage Arc, a tourist circuit of Uttar Pradesh, along with Lucknow and Varanasi.

The Tomb of Mariam-uz-Zamani in Sikandra was originally built as a Baradari by Sultan Sikandar Lodi in 1495.

Agra has two histories: one of the ancient city on the east, or left, bank of the river Yamuna, going back so far as to be lost in the legends of Krishna and Mahabharata and reestablished by Sikandar Lodhi in 1504-1505; the other of the modern city, founded by Akbar in 1558, on the right bank of the river which is associated with the Mughals, and known throughout the world as the city of the Taj. Of ancient Agra little now remains except a few traces of the foundations. It was a place of importance under various Hindu dynasties previous to the Muslim invasions of India, but its history is unclear, and possess little historical interest.[15] The 17th century chronicler named Abdhullah said it was a village before the reign of Sikandar Lodi. The king of Mathura had used the Agra fort as a jail. The degradation in the status of the site was a result of the destruction brought upon it by Mahmud of Ghazni.[16] Masud Sa’d Salman claims to have been there when Mahmud assaulted Agra, claiming the Raja Japal surrendered after seeing a nightmare. Mahmud however proceeds to pillage the city.

The region around Agra consists almost entirely of a level plain, with hills in the extreme southwest. The rivers in the region include Yamuna and Chambal. The region is also watered by the Agra Canal. Millet, barley, wheat and cotton are among the crops grown in the surrounding countryside. Both Rabi and Kharif crops are cultivated. The deserted city of Fatehpur Sikri is about 40 km southwest of Agra.[53] The sandstone hills near Fatehpur Sikri and on the south-eastern borders of the district are offshoots from the Vindhya range of Central India.[54] Agra is about 210 km away from the National capital of New Delhi(via Yamuna Expressway),[55] about 336 km from state capital Lucknow(via Agra-Lucknow Expressway),[56] and about 227 km from Kanpur(via Agra-Lucknow Expressway).[57] The city has an average elevation of 170 metres above sea level. 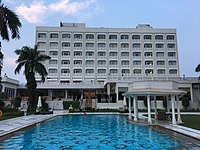 Tajview hotel, the first five-star hotel in Agra, operated by the IHCL group

Due to the presence of the Taj Mahal and other historic monuments, Agra has a booming tourism industry as well as royal crafts like Pietra Dura, marble inlay and carpets.[106]

40% of the population depends largely on agriculture, and others on the leather and footwear business and iron foundries. Agra was the second most self-employed in India in 2007, behind Varanasi, followed by Bhopal, Indore and Patna. According to the National Sample Survey Organization, in 1999–2000, 431 of every 1,000 employed males were self-employed in the city, which grew to 603 per 1,000 in 2004–05.[107]

Tourism has a significant role in the economy of Agra, with upwards of 9.5 million tourists visiting Agra and surrounding monuments in 2019.[108] The city is home to Asia’s largest spa called Kaya Kalp – The Royal Spa, at the ITC Hotel Mughal in Agra.[109][110] Other hotels include Taj Hotel and Convention Centre.[111]

Sanjay Place is the trade centre of Agra. There are about 12 major and medium scale industries, producing electrical goods, pipes, leather goods etc. There are about 7,200 small scale industrial units. Above 1.5 lakh pairs of shoes per day are manufactured in agra by the various footwear units.[112] Agra city is also known for its leather goods, the oldest and famous leather firm Taj Leather World is in Sadar bazar. The carpets, handicrafts, zari and zardozi (embroidery work), marble and stone carving and inlay work. 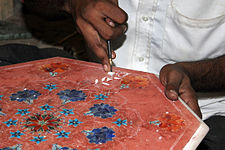 Agra district administration is headed by the district magistrate and collector (DM) of Agra, who is an IAS officer. The DM is in charge of property records and revenue collection for the central government and oversees the elections held in the city. The DM is also responsible for maintaining law and order in the city.[3][7][8][9] The DM is assisted by a chief development officer; six additional district magistrates for finance/revenue, city, administration, land acquisition, civil supply, and protocol; one city magistrate; and three additional city magistrates.

Inter-State Bus Terminal (I.S.B.T.), Idgah Bus Stand, Taj Depot and Fort Depot are the major bus stands in Agra, connecting Agra to most of the bigger cities in northern India. It is a major junction of highways with three national highways and two expressways (Yamuna Expressway & Agra Lucknow Expressway) originating from Agra.

Agra Airport (proposed to rename as Pandit Deen Dayal Upadhyay Airport[3])[4] (IATA: AGR, ICAO: VIAG) is a military airbase and public airport serving the city of Agra, in the state of Uttar Pradesh, India. The air force station is one of the largest airbases of the Indian Air Force (IAF) and has been synonymous with the Taj Mahal for over half a century.[clarification needed] On 15 August 2007, the airbase celebrated its sixtieth anniversary.

Sadar Bazaar is a popular shopping destination for tourists visiting Agra. It is located close to Agra Cantonment railway station and is in proximity to the Taj Mahal and Agra Fort.

Taj Mahal being a popular attraction for tourism, thousands of tourists from different parts of India as well as from foreign countries come to Agra. Sadar Bazaar is the place most of them come to for shopping. Shops in Sadar Bazaar sell leather products, petha (sweet), handicrafts and garments. The market sees heavy activity in the evening when the streets are filled with locals and foreigners alike.

Ashok Cosmos Mall is the most exclusive shopping mall and entertainment centre. It is a futuristic shopping mall at par with international standards, designed by the world-famous architect Hafeez contractor. The mall has a multiplex, conferencing areas, entertainment zones, food court, and restaurants. Ashok Cosmos Mall strives to deliver an excellent retail experience, and it is famous amongst the residents from the nearby neighbourhoods.

Meher Theatre is one of the famous movie theatres in Agra. It provides the best possible comfort levels at the minimum ticket prices. The movie experience in a big auditorium is much better than today’s small multiplex’s screen. Their staff is helpful and well mannered. Theatre has a capacity of 584 comfortable seats with excellent sound quality. Tele booking & online booking facilities are available. Tickets rates are also reasonable.

Mehtab Bagh is one of the popular tourist place located in Agra. It has diverse vegetation, sports facilities, hiking trails, and a beautiful lakefront. The park has a great mix of sandy beaches, recreational parkland and natural waterfront areas. Mehtab Bagh has a large octagonal pool in the middle of the garden. It is one of the most tranquil spots in the middle of the bustling city. The park is an excellent place to go for a little walk and take in the wonderful scenery around you.

Pushpanjali Hospital & Research Centre has all highly advanced facilities and qualified & trained nursing staff in all wards. Mr. VD Agarwal is the founder of this hospital. The hospital has three hundred fifty beds including ICCU, CCU, PICU, NICU, Emergency, Trauma, and Burn Unit. They have clinical expertise at very competitive prices under one roof through a team of more than a hundred specialists & super specialists for all specialised and general treatment. They offer a 24 hours emergency in a warm and friendly environment. They take care of your health by making routine check-up and provides the best patient care.